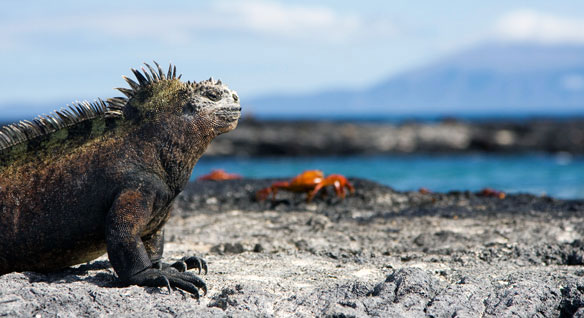 What does the Charles Darwin foundation do for the islands?

ritain’s most influential scientific and naturalist, Charles Darwin, wrote The Origin of the Species on 1859 and changed the word of its time. But, to be able to theorize the natural selection thesis, Darwin had to live and breathe the natural life in the Caribbean among special species and paradise-like surroundings   for years. While pursuing its investigation, Darwin stopped at the Galapagos Archipelago for five weeks to explore the most unexplored spots and investigate the sites’ flora and fauna.

Today, Charles Darwin’s legacy is still present: in 1959, after the archipelago became a World Heritage and a protected National Park, the Charles Darwin Foundation was founded by Julien Huxley under the auspices of UNESCO and the World Conservation Union in Puerto Ayora, Santa Cruz Island. The main goal of the Foundation is to promote ecological and environmental education among tourists and villagers, and also to conduct scientific studies over the islands particular ecosystem.

The Charles Darwin Research Station functions also the foundation headquarters, and even though is located in Santa Cruz island, it also has satellite offices on the Isabela and San Cristobal islands. Through the Research Station, the Foundation makes sure to provide work for villagers and also to hire highly qualified Ecuadorian and foreign scientists and biologists to keep on the researches and investigations that are nowadays conducted on the archipelago.

The Foundation also believes on the power of education which is why is always promoting and offering courses and workshops to the locals and also to tourists on environmental education for the conservation of the island’s flora and fauna. They work closely with local schools, fishers, farmers and artisans to teach them how to make their activities sustainable for the living beings that inhabit the islands. On 1968, it collaborated with the construction of the Galapagos National Park and is vital part on keeping the species of the Archipelago protected.

Visiting the Research Station is Santa Cruz is a great option to experience the most adventurous side of the islands. In Galapagos Center Expeditions we organize visits and tours in the Station and all around Puerto Ayora, don’t hesitate to contact us to get more info!

We Love What We Do!