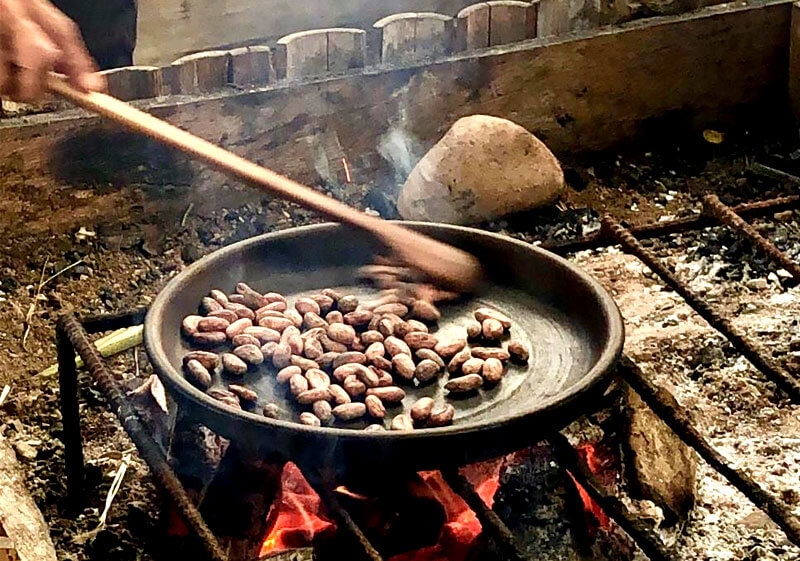 The history of this fruit has been linked to Ecuador for over 5000 years. From this time come the earliest evidence of its cultivation.

Until recently, the original cultivation and the first use of cocoa was attributed to the cultures of Mesoamerica, the Aztecs, Mayas and Toltec. These consumed cocoa already 2000 years before it spread over the rest of the continent. New scientific discoveries, however, show that cocoa was used more than 5000 years ago in the Ecuadorian Amazon. In the municipality of Palanda, located in Zamora Chinchipe province, archaeologist Francisco Valdez found tombs containing leftovers from food.

Among these grave goods were also remains of cocoa. This find was documented in 2014 in the audiovisual series “El Gran Cacao” of the Ecuadorian Institute of Intellectual Property.

In the southern part of the Ecuadorian Amazon, where today is the village of Palanda, developed the culture Mayo-chinchipe over 5500 years ago. This time was determined using the radiocarbon method. The people settled in villages with circular buildings and lived mainly from agriculture. This culture is the oldest in the western Amazon. Recent finds point to a relatively complex social organization.

Shell remnants (fencer snails and sting oysters) also indicate trade relations with peoples of the Pacific Coast. The remains of Theobroma cacao (the scientific name of cocoa) found in pots and bowls indicate that the cocoa was used to make an energizing drink. He was so important to this culture that he was given even deceased on their way to another world. The cocoa cultivated by this crop was that which is now so important to Ecuador, the aromatic fine cocoa. These remains were in the, at an altitude of 1040 m above sea level. NN. , located archaeological site of Santa Ana-La Florida.

The Amazonian cocoa then came to Central America in one way or another, says the archaeologist Francisco Valdez. There he attained an extremely high cultural importance and in the colonial period began to export him to Europe.

Many years later, this raw material in the form of delicious chocolate should become an important part of European culture.