8 reasons that will make you remember your trip to Galapagos - Galapagos Center Expeditions
51142
post-template-default,single,single-post,postid-51142,single-format-standard,eltd-core-1.0.3,ajax_fade,page_not_loaded,,borderland-ver-1.14, vertical_menu_with_scroll,wpb-js-composer js-comp-ver-5.7,vc_responsive

8 reasons that will make you remember your trip to Galapagos 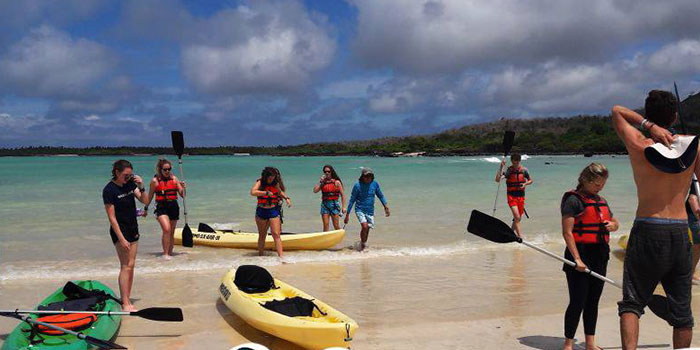 8 reasons that will make you remember your trip to Galapagos

Is there any other place in the world where you can share with giant tortoises, land and marine iguanas, be at the beach being entertained by animals who like your company, and just having fun while caring about the environment? Maybe no. And if there’s one, Galapagos will always be your best choice!

This archipelago is more than any other site in the world for the reasons of being a marine and terrestrial sanctuary of species, and a paradise for those who still love nature. But there are some reasons that will make you think twice before deciding not to come to Galapagos. Read here the most relevant:

1.Marine iguanas, unique in the world, snort at people

That is right. Why? Because they are the only marine iguanas in the world, and because they are salty, and they need respect to their independence. Nonsense? No: they can let you sit near them to share a good time or just take a picture of their sympathetic faces, but if you get too close they will snort at you with salt right from their salt glands… so next time you see them, respect their space or you will be covered in salt!

Well, this is partially true. It’s not that they are friendly, but since the fish population is big enough, you don’t have to fear any of the sharks swimming next to you. At least nothing has happened until now, and we want it to keep that way.

3.There are bars in Puerto Ayora and Santa Cruz to enjoy a drink…

Yes! Not much more than 25,000 people live in Galapagos, but that’s nothing to worry about: nightlife in Galapagos is full of excitement and cocktails that will drive you crazy, such as the local caipirinhas. There are some popular bars where you will learn some dance steps and have tons of fun all night!

4.… and cafés in San Cristobal to enjoy coffee-sipping!

If you are a serenity lover, or last night was so intense that you want to recover at a quiet place, Galapagos has the perfect plan for you: a good ol’ cup of Ecuadorian coffee plus the best views of the ocean, including pelicans flying near your spot on a sunset, or iguanas just chilling out.

5.The rarest penguins are here!

You can find penguins mostly in cold southern places, and Galapagos is everything but cold… but these penguins, the world’s most northerly, live in Galapagos due to the cold waters coming from the deep ocean.

6.Blue-footed boobies that attract their lovers with their feet

Yes… their feet allow males to attract women and produce offspring. Apart from being one of the most representative species from the Archipelago, their feet color is a distinctive for humans and female boobies: the bluer, the more dazzling.

7.The Wall of Tears, the local replica to the Berlin Wall

Isabela Island had a penal colony during the 20th century. Just as the Berlin Wall, the Wall of Tears was built after WWII, and the reason to build it is still unexplainable. It has that particular name due to the tears that prisoners dropped after being forced to work starving under the rough sun. People say that the Wall has a dark aura, and that sometimes you can hear the crying from prisoners.

The Seychelles and the Galapagos are the only places in the world where you can admire these rare creatures. From their size comes the “Island gigantism” that states that isolated species can grow bigger and healthier than mainland animals.

Galapagos Center Expedition shows you these and more facts for you to get entertained every time you want to come! Discover more on our website.